Disconected in Cuba: The last country without Internet | MadBush

Disconnected in Cuba: The last country without Internet

How the World would look like without the Internet? Hard question. My grandfather remembers the era when TV didn’t existed, my mother remembers times when there was no internet. Me and my generation remember nothing. It seems that we were born connected. However, there is a place in the Caribbeans that might challenge this modern mode of connected.

Cuba is probably one of the last countries in the world which can show you a quick demo, how it would actually be without the internet? The access to internet in Cuba is only 3.4 % – one of the lowest in the world. A blogger Yoani Sanchez correctly called Cuba  “the Island of the disconnected” as it really creates the feeling that you just travelled back in time. During my visit to this communist country in 2015, I faced some bizarre and frustrating things about internet access in Cuba, that I would like to share with you.

Where to find internet? 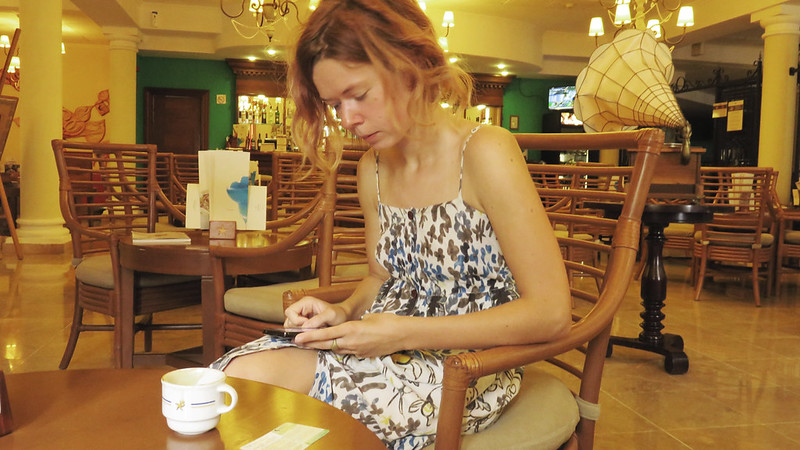 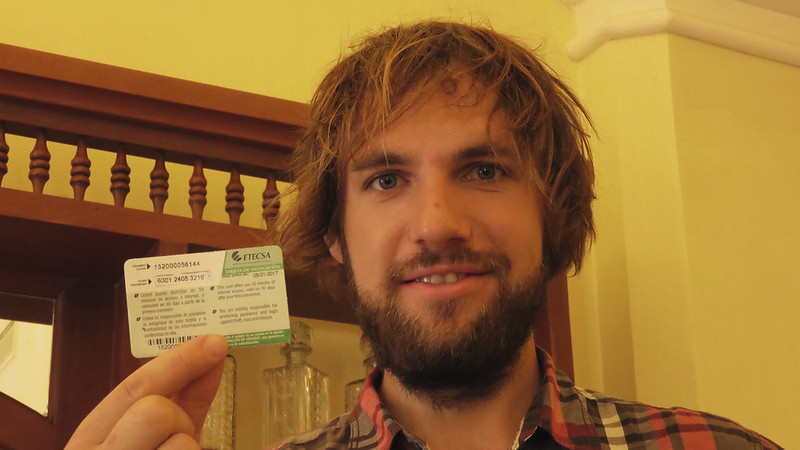 Before coming to Cuba, a friend of mine advised me: “Plan your trip before coming. There is simply no internet…”. Well, wrong.

Technically, very limited and restricted internet access is available on this Caribbean island, but the Cuban law only allows to use it in the public internet cafes at a ridiculously expensive price of  6 – 8 USD per hour.

You can find internet access for foreign tourists in several high-end hotels in the bigger cities. All you need to do is to buy an internet card. Some of the hotels are even making extra profit – allowing to buy the card only after you purchased some really overpriced drinks at the bar.

Here I am, with my overpriced latte in the luxurious armchair in the hall full of other tourists leeching the precious connection minutes. After a while, social media loads slowly on my mobile screen. No censorship on this and happiness fills my heart. However, the price is still haunting me.

Even being a foreigner with way higher income than Cubans, I felt a lit bit uncomfortable to use internet. The facebook didn’t seem SO exciting afterall. Not for 8 dollars an hour. That’s what happens when you take free internet for granted. How many hours we normally waste on internet doing nothing, just scrolling? Well, one expensive hour of internet showed that probably a lot. When you have a timer ticking important things get done and no time for pictures of kittens 🙂

Who uses internet in Cuba?

Apart from tourists, Rich Cubans also find a way to have internet access. Sadly enough, even though the communism declares equality, the social inequalities are obvious. Anyone working in tourism earns minimum 30 USD a day (a full month salary of most prestigious profession – surgeon). Obviously, they can afford buying the internet access. Internet can also be reached by the satellite phones, available on the blackmarket. Didn’t check on those. 🙂

But the living proof of a rich Cuban just stops to pick us up (we’re hitchhiking). During our trip together he pulls out an expensive smartphone and starts showing facebook page of his restaurant in the prestigious area in Havana. From one of the photos on his feed, starred Rihanna (some singer, that someone might know).

“She was in my restaurant!” proudly declares my new friend. Well, now it is obvious why he can afford having internet access.

Average Cubans can only use old-school email app, by buying data from their phone operators.

‘I can’t afford using internet. Almost no one can. My mother’s pension is 5 CUC (5 USD) a month. So it is one hour of internet,” told me a small B&B owner Mirta, showing the email application in her phone. The email interface looked like 90’s – plain text + one really bad quality image that you can attach to your email. I looked into the pixels of their window to the world and felt sad.

Even buying computers was not the easiest task – until 2008 it was prohibited for Cubans to purchase their own computer. As a result, by 2011 there was only 783,000 computers in the whole island.

Interestingly enough, even with all these restrictions people seem to be watching TV series, movies and listening to mp3s.

The teenage girl Angela is showing me her laptop full of reggaeton music and her favourite telenovelas from Mexico:

“I paid one guy in the school to record it for me on the CD.”

The internet restrictions open a niche for download business. In the city you can find some underground shops (really, I am not sure about the legal status of them) which sell downloaded movies, music and smartphone apps for a particular price. The more restrictions, the more creative people get.

Love letters from the past

If digital is not functioning properly, there is always analog opportunities. The Argentinian guy, who I meet, tells me the story of his Cuban experiences. What you normally do, if you meet a nice girl? Ask her facebook. However in Cuba it is a lit bit different. The guy told me that the girls he met asked his address.

One nice thing about not having the internet is that people still write letters. Inspired by this vintage feeling of envelopes and letters, I wrote my own. I hope censorship did not burn it… 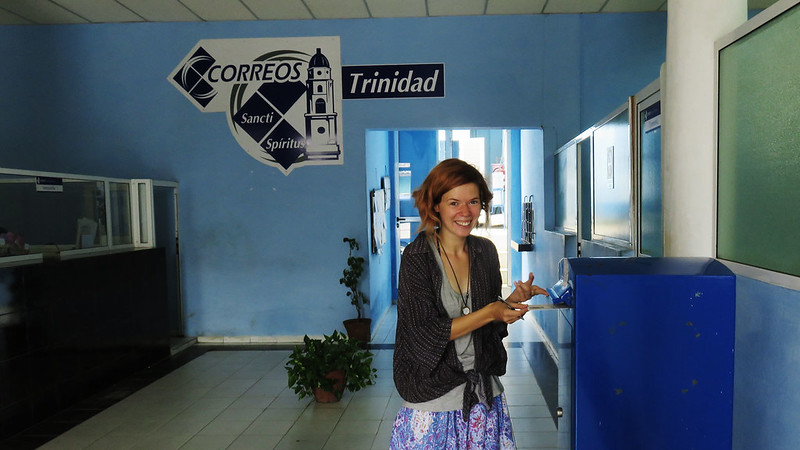 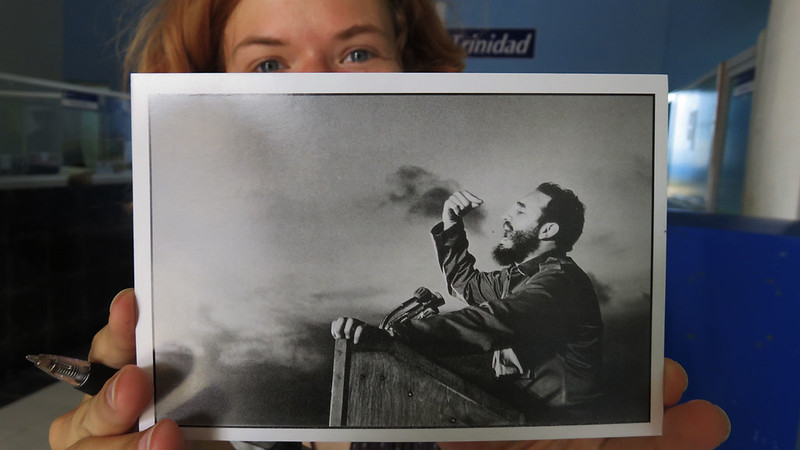 Why internet is unhandy for the regime?

In the past, Google attempted to change the situation in Cuba and offered to introduce their services into the island. However, these attempts were greeted unfavourably by the Communist Party.  According to them, the technology is necessary for their youth, but they are going to introduce it in their own way, aligned with the values of the Revolution. They expressed fear that “imperialistic” management of modern technologies will have a bad influence on Cubans.

Why internet is so unhandy for the dictatorships? Aristotle believed that citizens must actively participate in politics if they want to be happy and virtuous. And Greeks did participate in politics in their market squares. The modern Agora moved to the digital space, but if politics is, so to speak, bullshit, then of course it is better to cut the nation out of it. Internet has almost no effect on forming public opinion in Cuba. There is no medium to spread new revolutions. So the government can sleep calmly.

The Communist Party’s newspaper Granma is taking its shift in forming public opinion! This newspaper has been publishing since the actual Revolution and the name granma comes from the name of Che Guevara’s ship with which he started conquering Cuba. 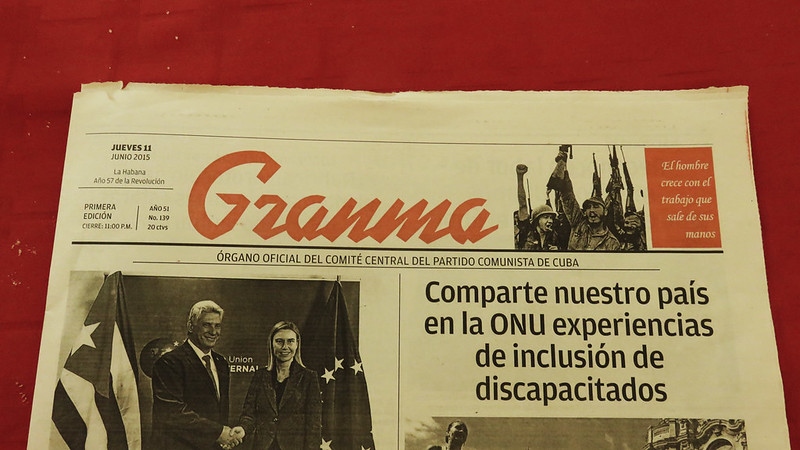 On the right corner you can see the young Fidel and on the left instead of the number of the edition – numbers which count time after Revolution, like the era after Christ. The newspaper basically contains nothing too interesting read – propaganda, Che Guevara stories, “life is getting better”.

And of course, without the internet, all these propaganda posters make sense: 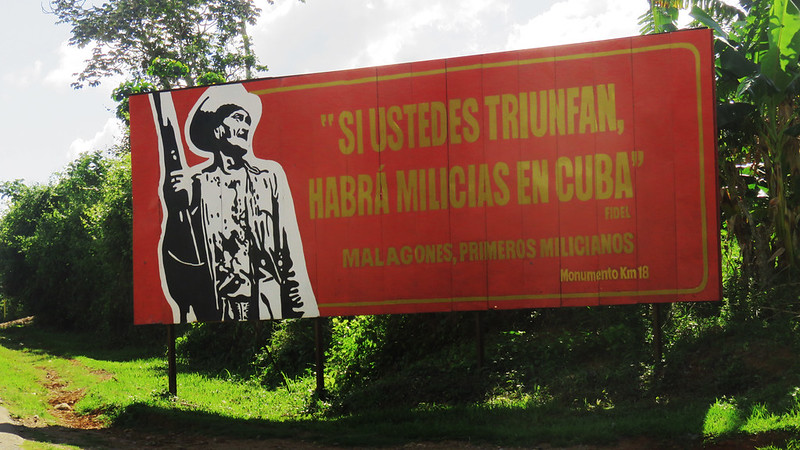 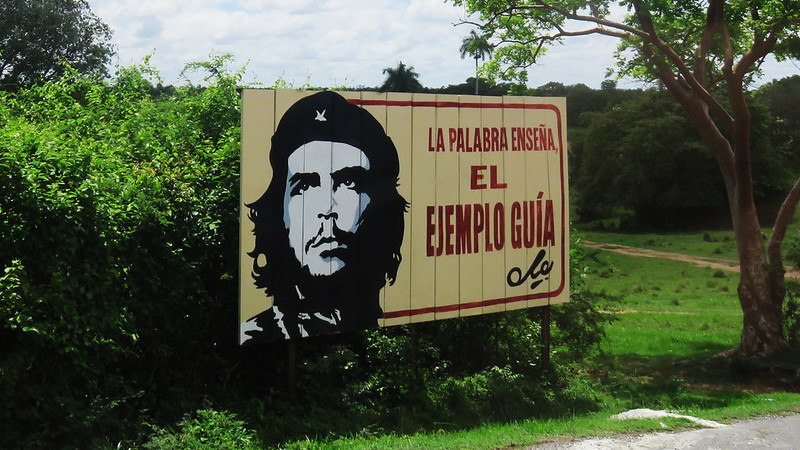 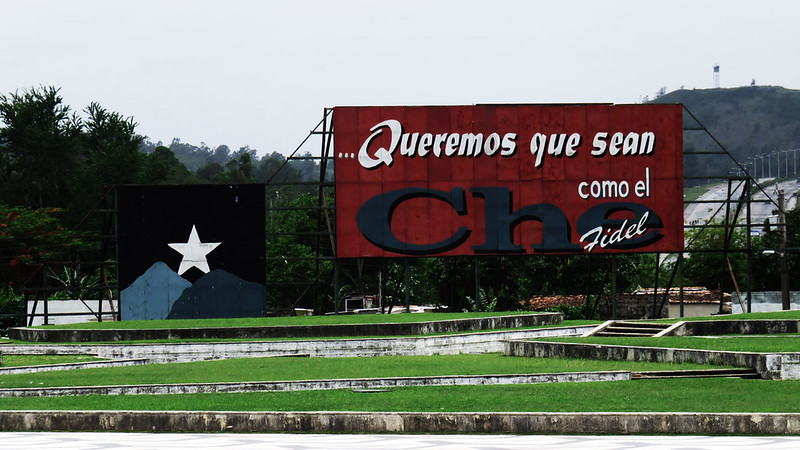 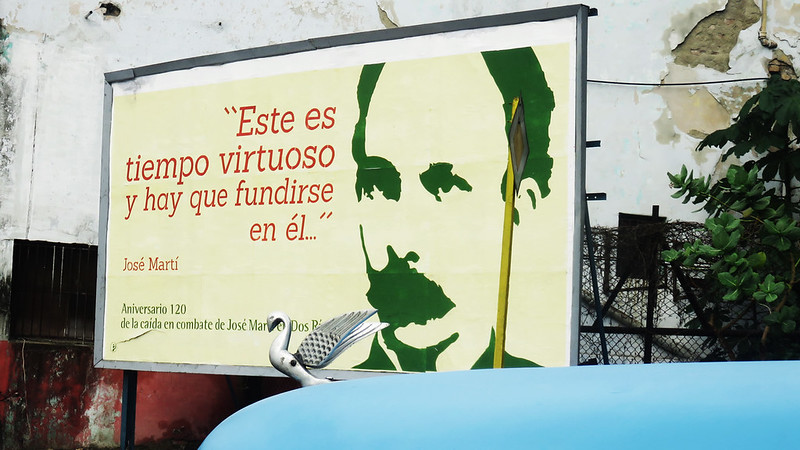 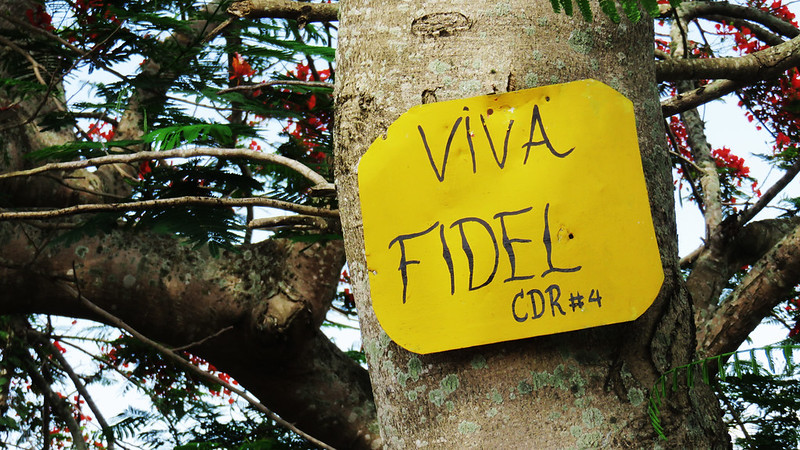 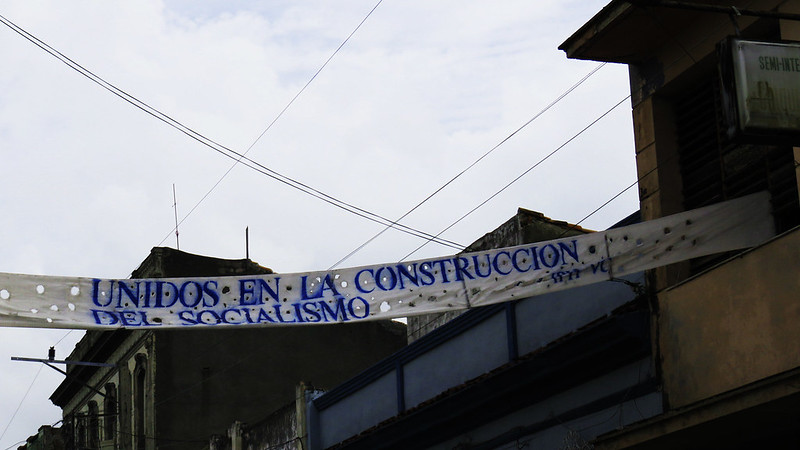 Recently, the warming relationship between US and Cuba started bringing some obvious and promising changes.  During the last year, the first public Wi-fi hotspots were opened in 35 locations, the speed was increased and prices reduced.

During his legendary visit to Cuba, the president Obama stated that “one of the things that we’ll be announcing here is that Google has a deal to start setting up more Wi-Fi and broadband access on the island”. And probably Google will open their shop soon. This simply means that one of the last grey areas on the world wide web map will be connected. Probably Che Guevara is rolling in his grave…

Without internet you can spend more time: 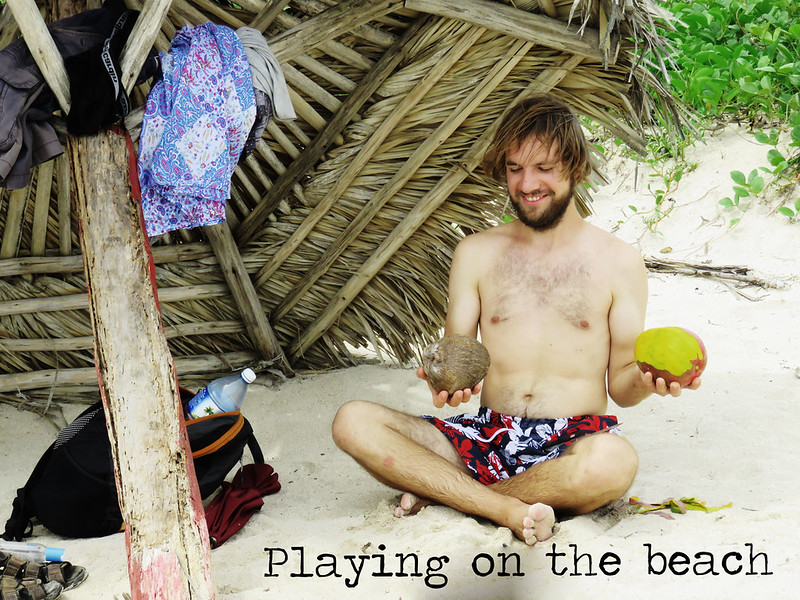 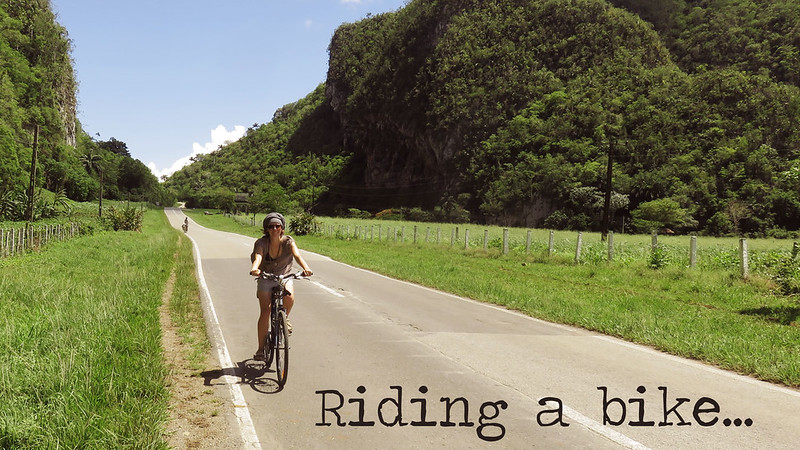 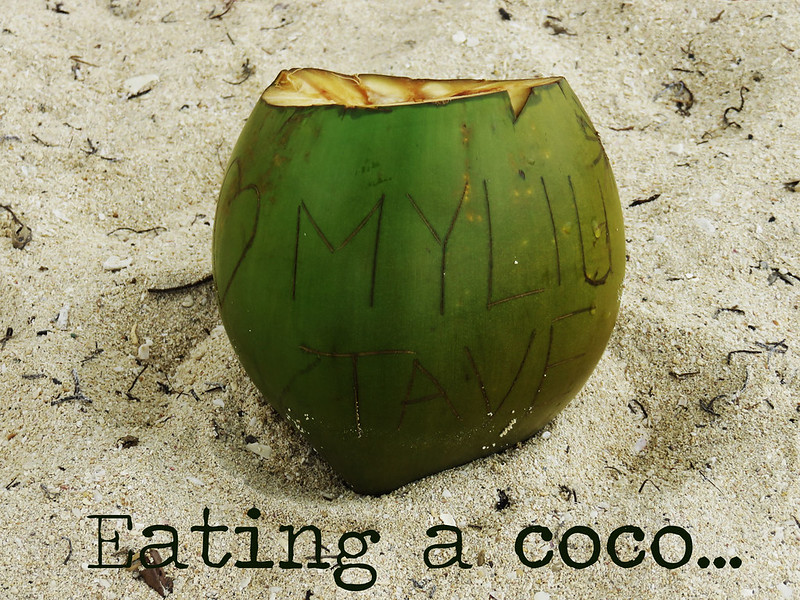 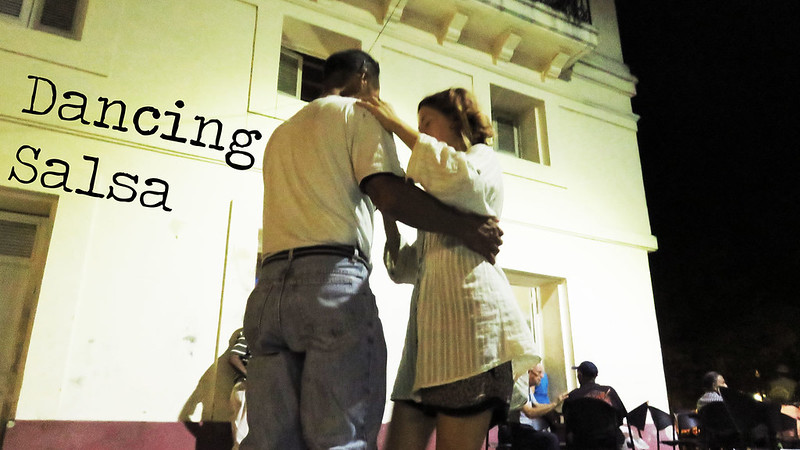 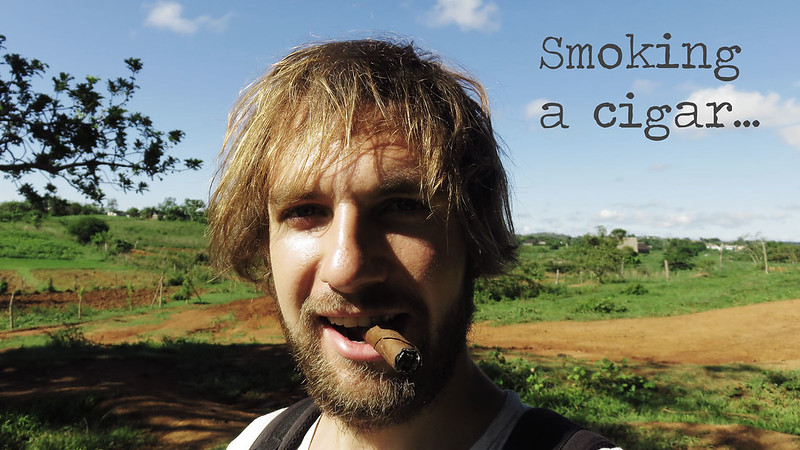 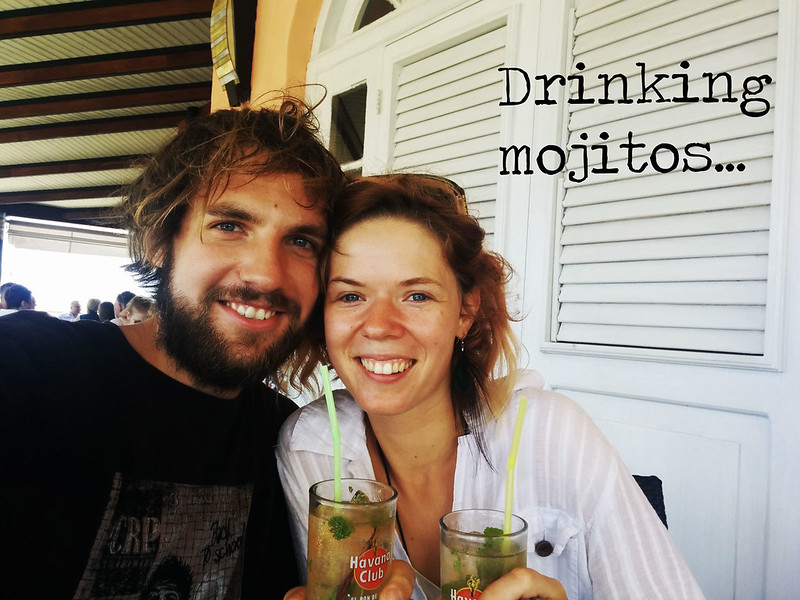 Hi, I'm Paulina. A graphic designer, writer, wanderlust artist, yoga and camera enthusiast from a small country called Lithuania. I believe that every day could be a piece of art because we are all artists.

Cuba, Travel Tips
Is Cuba safe: 7 most annoying scams
Cuba
All truth about food in Cuba: How many beers you can buy for 0.04 USD?