Hermit of Sierra Nevada: Why electricity is overrated? | MadBush

Hermit of Sierra Nevada: Sustainable lifestyle or why electricity is overrated?

Sierra Nevada, located on the Carribean coast of Colombia, is considered to be the highest coastal mountains in the world. The local indigenous Kogi people claim it to be the spiritual heart of the world. One of the most spectacular glimpses of Sierra’s snow peaks you can get from a place called Cerro Kennedy – at the altitude of around 2500 m and very very early in the morning when the clouds break for just a couple of hours to unveil all the beauty. Cerro Kennedy is aproximately 8 hours walk from mountain village called Minca. We were on our way to the top, when we met a hermit, living alone in the mountains. He shared with us his unconventional ideas about life.

Arriving to the Juan’s coffee farm

He is a real mountain man, guerrero.

We were already staying 2 weeks in the Colombian mountains, in the cabin at around 600 m above sea level and 1,5 h walk from Minca village in Sierra Nevada. Emotionally, we were preparing to do that most difficult 8 hour hike up to see the snow peaks. The dueño of the cabin were giving us the last advices:

“If you want to go to Cerro Kennedy, you should stay in Juan Carlos place. It is half-way to Cerro Kennedy. He is a real mountain man, guerrero. Lives alone in a very rustic house. Maybe you could bring him a present from me…” – said dueño Giuseppe, reaching for a bag of weed.

The misty road to the peak begins

Half way done… And almost done with the energy reserves.

The farm of Juan Carlos was situated at the altitude of around 1900 m, so it took more than 5 hours to elevate our bodies and heavy backpacks up to this altitude. We reached the opening of the forest – a terrace with an amazing view that allowed to see the panorama of the surroundings within 100 km distance. The entrance to his farm was marked by many coffee plants, hiding a simple small cabin – the only building in the territory. The owner was inside.

“Today I just finished all my weed. I was thinking what to do now. But I had a feeling that someone will come and bring it to me. And here you are!” he greeted us with a smile.

Juan was a man of 44 years old, with a long hair tied to the pony-tail. Being American-Colombian, he came back to Colombia 5 years ago to fulfill his dream of building a self-sustainable farm.

Actually, a person doesn’t need electricity. It is almost in our DNA that we cannot live without it. But the truth is quite opposite. Electricity is needed only for stuff that people spend money on.

We spent the night in a tent just in his coffee garden. Next day, instead of starting hiking up straight away, we decided to stay in the Juan’s farm, to help him with his daily agricultural challenges and of course to know the mountain hermit better. Juan equipped us with machetes and assigned a task to weed out part of his coffee garden, which looked more like a jungle than a “garden”.

While soaked in sweat we were swiping the machetes, Juan was making a new mountain terrace for drying coffee. With enormous energy he was digging, carrying heavy stones and full buckets of soil, then again digging. The work was not finished until the late afternoon.

“What can I say, I like working a lot”, Juan was looking proudly at his day work. It was time for a victory joint. He pulled out a joint, “organically” rolled in a dried banana leave. The couple puffs made him to start opening.

“It happened on 9/11, when I made the decision. I didn’t wanted to be part of the system that needs resources and fuel. Because that is the main reason for all the messed-up things in the world. I was the wrong match with the society. Many people in my family are revolutionary with their ideas. So I did the same.”

The simple house of Juan Carlos

His simple cabin does not have any electricity supply. When asked about it, he starts explaining his opinion:

“Actually, a person doesn’t need electricity. It is almost in our DNA that we cannot live without it. But the truth is quite opposite. Electricity is needed only for stuff that people spend money on”.

Juan continues to explain. The mountain climate allows him to store food without a fridge. He has a couple of lanterns with solar chargers and that’s it.

“Electricity distorts the natural human’s day cycle. It creates illusion that the day never ends. Normally, I go to sleep very early and wake up at dawn.”

However Juan expressed a pity that he can’t use a blender. “Blender would make life easier. Maybe I will build a solar panel one day. But I am not going to do it just for a blender… I will see.”

I was always searching for a bigger challenge. And one day I just reached the limits that my job could provide

When Juan first came here, there was nothing but the coffee trees. He built his off-the-grid shelter from scratch alone, with his bare hands. Upon his arrival, he built a tent and lived there for 4 years, until he built a cabin. Processing the coffee was also a huge challenge at the beginning. Having around 10 000 trees, he was harvesting coffee himself and peeling the seeds manually with his hands, before he introduced the automation to this process.

“The very reason why I chose this place is because there was nothing here. It was the biggest challenge I could take. I not only needed to do it, I needed first to learn how to do it. I never knew before how to live this way.”

Before this complete transformation of his lifestyle, Juan was working as a bank accountant in the United States.

Juan Carlos’s biggest challenge – the mountain and his garden

“I was always doing more than was expected of me. I was always searching for a bigger challenge. And one day I just reached the limits that my job could provide. I also can’t imagine having a boss over my head with a whip. Now I am my own boss…”

“At the beginning my sisters thought I am a bit crazy to do it. But at the same time they were expecting something like that from me. They believed in me, that I am capable of doing it. I was the best in everything I did, so they knew that I can do this project as well.”

“And all the consumerism…” continues to explain Juan. “All the plastic that is only needed to sell things and almost instantly becomes irrelevant after the moment of buying. I reduced the amount of things I buy drastically.”

Juan’s main income is the coffee, which is said to be the best in Minca. Accidentally, without knowing anything about coffee, he bought a farm with a high potential. Additional income comes from  tourists who stay on his farm for the night or participate in his organized coffee tours.

The rustic shower with the best view

“It’s slow, but more and more people come. And I am happy.” In the future, Juan is planning to build a separate cabin for his visitors.

“I don’t need to pay for electricity. I have almost infinite resources of water, that mountains provide me. I grow my own food. I can easily live on  80 000 pesos a month (~40 USD). Because I grow everything myself. I still need to buy tomatoes, onions and other products such as oil or pasta. But I am planning to reduce my budget to 40 000 pesos (~20 USD), when I will start growing tomatoes and onions myself.”

“Well, if I don’t inspire, it doesn’t matter. At the end it is all about me and what I want…” 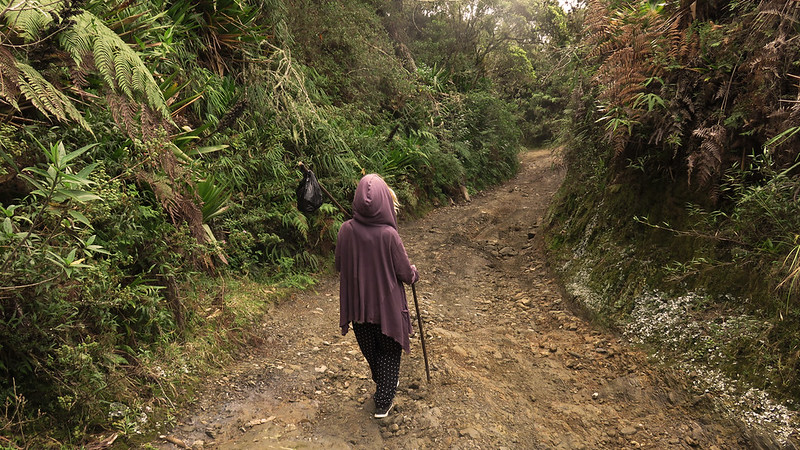 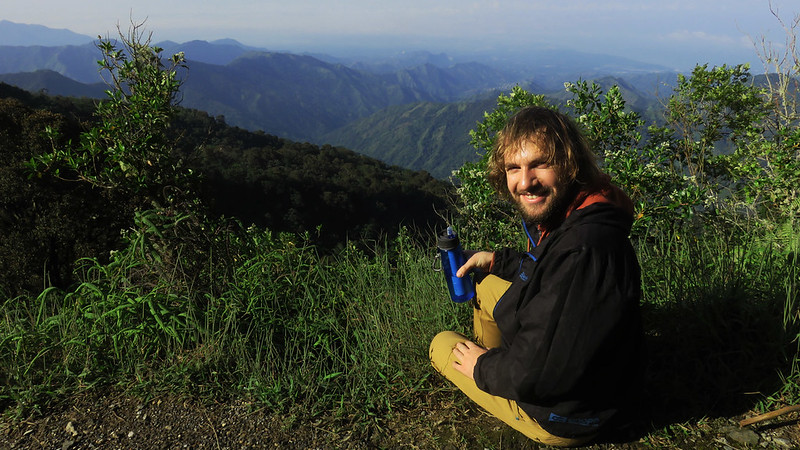 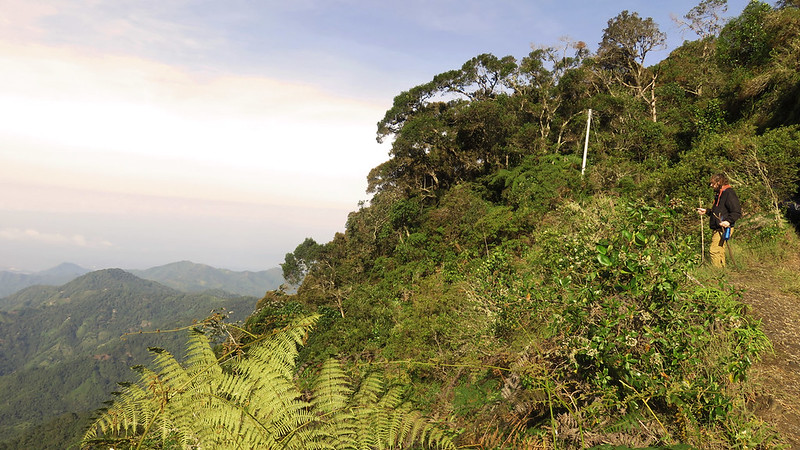 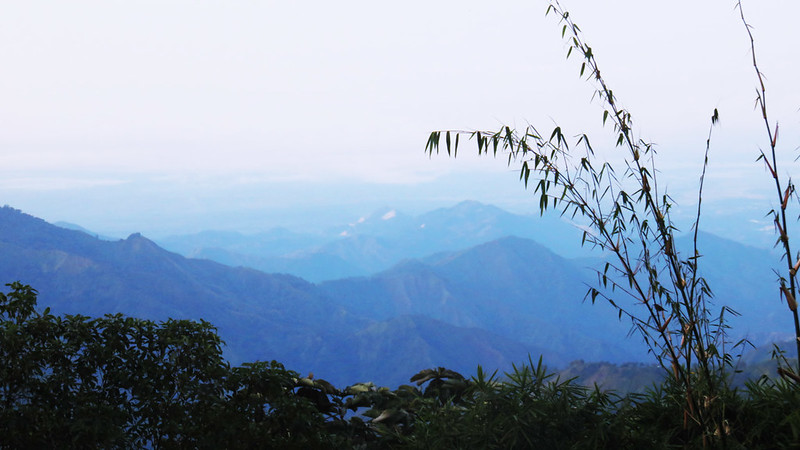 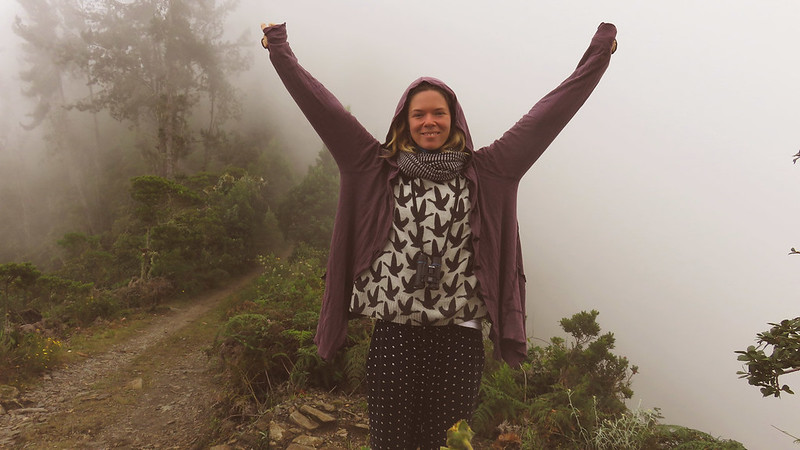 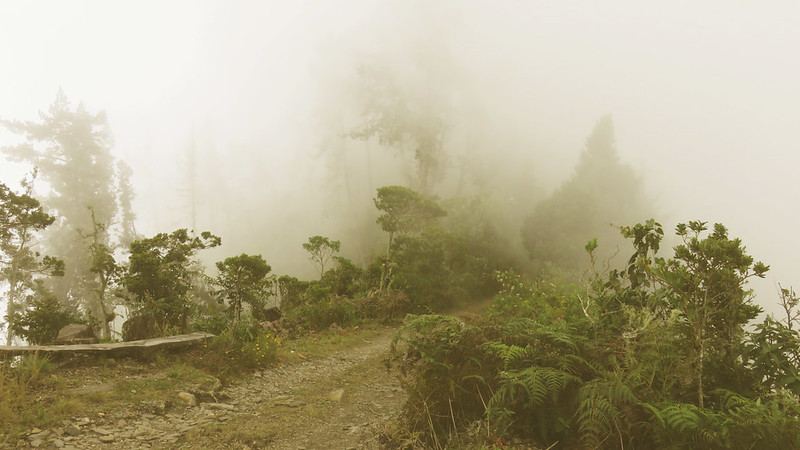 Early in the morning we said goodbye to the mountain man and head to the Cerro Kennedy to have a look at the snow peaks of Sierra Nevada. 5 more hours of sweating up and we reached the place where the snow peaks should be seen. Tip of the day – go early, like really early… Be there at 6 A.M!

Unfortunately, too much sleep in the morning and we were late. The beauty of the snow peaks were hidden from us. Everything was dwelling in the mist of the white cloud. Just as  if someone forgot to model the rest of the world environment, and you reached the blank end of the matrix.

No, I can’t believe what I’m seeing… Where are the snow peaks??!!

Most important is to stay positive! 🙂

Hi, I'm Paulina. A graphic designer, writer, wanderlust artist, yoga and camera enthusiast from a small country called Lithuania. I believe that every day could be a piece of art because we are all artists.